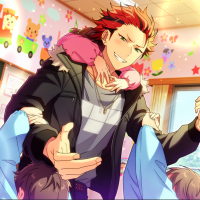 
HHW are best girls but roselia... has the best songs....

Thats is also a mistake :(

For real though. Hello, I’m Marian and I’m from Mexico and I have exactly 0 friends who are into bandori or any movil game that is not feh really. So, I want to make friends! Follow me and I’ll follow back, though I might only post rants about my disgusting pulls and stupid ugly luck :) but hey! That might brighten up your day!

I’ve been playing bandori for over 2 years, and I downloaded the game because I saw a Miku x Bandori commercial and it looked really fun. And what do you know it is fun. But the suffering... you don’t foresee that...

So anyways I’m here to have a good time!

Other stuff I’m into:

I started GBF over 2 years ago as well, but I became obsessed then left, then obsessed, then left. But now I’m done with this game for good. It was WAY TOO MUCH FARMING AND GRINDING. I might give away my acc I feel bad abandoning it to pick up dust... anyways!

Same story with FEH and Pokemon Masters, I tried to get into them but failed miserable. However I have played some FE and I’m a HUGE Pokemon fan!! Hmu if you want to talk Pokemon!!

I like Tourabu but only on the surface, I like the characters and have watched the anime.

I like enstars as well but only play Music. But I love the boys wholeheartedly!

I am waiting for Project Sekai to launch and I ADORE vocaloid (MR. KAMUI GAKUPO YOU ARE THE LIGHT OF MY LIFE (please give us a gakupo song cover @bandori)) but I wouldn’t say I’m that knowledgable in Vocaloid stuff, though I do know a bit. That and I also like a handful of UTAITES and if you have not listened to the Actors albums by Exit Tunes BOY ARE YOU MISSING OUT.

Lastly I’m a huge anime fan, WHERE ARE MY GINTAMA BROTHERS AND SISTERS, and a proud BL reader :)) if you’d like any BL recs i’m your girl lmao

(((I also have another JP account I don’t use but it has some limited cards so I’m also thinking of giving it away, i’ll handle that on twt in the future maybe...)))

BOTH ENGLISH AND SPANISH ARE OKAY!